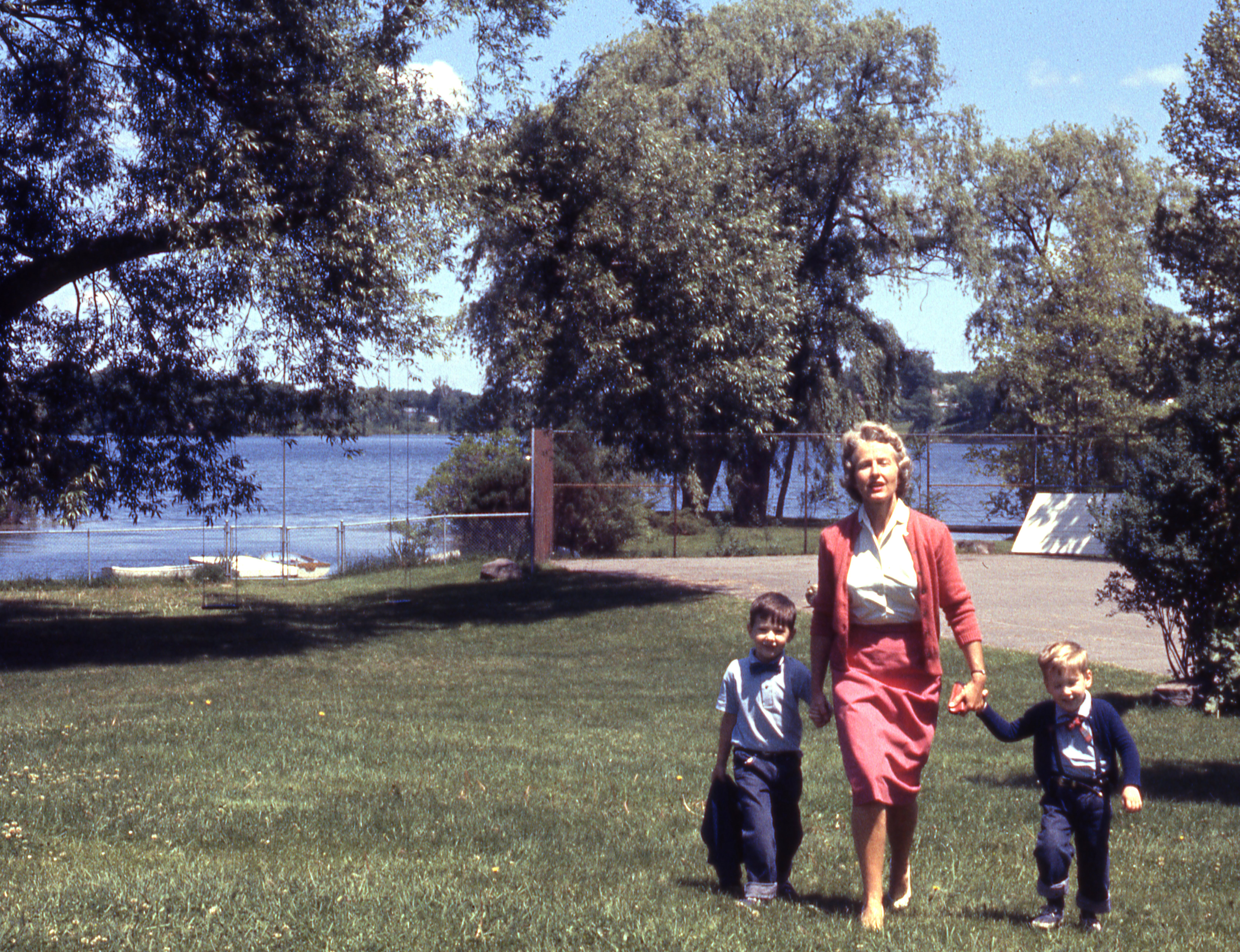 When my little sister came along in November 1962 I was moved out of the cozy childhood cubbyhole at the back of our Michigan home where I’d slept and played for most of my six years — a former sewing room actually, with a yellow, accordion-like sliding partition, linoleum floor, and yellow formica countertop — and into a proper bedroom off the main hallway. The new room, recently vacated by an elder sister, was predominantly pink, from the pleated valances to slippery sateen comforters, a look eventually remedied by my mother’s period do-over with brown and tan plaid wallpaper.

Despite the initial decor I was delighted with the new digs. There were two single beds and two, arched sash windows from which to survey our idyllic outdoor kingdom; a long, sloping lawn flanked by fruit trees leading to a magnificent weeping willow, its massive trunks reaching outward like the arms of a gnarly giant. Beyond the big willow was Long Lake, where we swam and dove off an ancient raft, fished for bluegills, or launched day-long expeditions to collect frogs, newts, and turtles. In winter we lived for the days – and nights – when the lake turned to thick, black ice and we could skate forever in any direction, marvel at trapped minnows and air bubbles, then return to the dock to wrap frozen fingers around mugs of steaming cocoa.

From the right-hand window I could also see the crumbling asphalt tennis court where my brother and I raced our spiffy blue-and-orange three-wheeled tandem in teetering, two-wheeled circles around sagging, rusted net posts, and where Dad had built a two-story plywood playhouse (a dark hideout for children and wasps) as well as an aluminum-covered sandbox on wheels filled with fine, cold white sand, that could be rolled out of its shady corner to warm in the sun.

The window on the left, however, contained an ominous, nearly invisible artifact in one of its upper panes; a tiny, jagged hole the size of a BB. I soon learned the tragic story: Years earlier the boy who lived in my room had been blinded in an accident with a gun. It never occurred to me to doubt such a sad story, one made all the more real every time I looked out the window, finger pressed to the rough edges of the hole, imagining a metal bead piercing the glass…. The only lingering uncertainty in my mind was a vague memory of a visit one day by a heavy-set man in a black raincoat and matching eye patch who had returned to “look” at the house he grew up in – with his German Shepherd seeing-eye dog. The passage of time has a way of blurring such recollections and more than 50 years later, I wonder in hindsight if, perhaps, the story was conveniently contrived to deter any interest in guns – and if the the surreal image of the mysterious blind man returning to see his childhood home is something I’ve cobbled together from other stories or imagined in so many dreams.

Am I confusing it, for instance, with the oft repeated tale of my parents’ lavish dinner party for Roy Andries de Groot, the celebrated (and blind) wine and food critic, who also arrived with a seeing eye dog? (The grandiose de Groot proved to be a pompous fraud when he first tasted, then waxed poetic about the virtues of a fine Bordeaux that my father had hoped would please, but upon sipping from his own glass, immediately realized had gone off).

On a whim, in this age of instant information, I search for information about George B. Storer, the broadcasting executive who sold the house to my parents in 1954 and whose name was forever connected to the towering 80-ft. flagpole/antenna that pulled in stations from his radio and television empire – and at my sister’s wedding in 1970, was infamously scaled by a soused groomsman in morning dress.

So is my wounded boy and mysterious visitor among these men?Newspaper accounts and corporate bios reveal that all four sons follow their father into the family communications business with equal measures of success, are avid sportsmen, conservationists, and, like their father, give back through public service and generous contributions. Storer senior dies in 1975. There are few useful clues until… I am arrested mid-keystroke by an obituary in the Cleveland Plain Dealer that confirms at long last that the story, while not entirely accurate, is basically true.

Born in 1926 as the second of the Storer’s four sons, his life story now unfolds to me through the eyes of others who describe him as someone “interested in everything” with a delightful sense of humor and a “very, very sharp mind” who, despite his handicap, was encouraged by his parents to swim, play golf, water-ski, bowl, play jazz piano, and ride bicycles on country roads (followed at a discreet distance by his mother). He was six in 1932 when he picked up a tear gas gun (purchased by his father after the Charles Lindbergh, Jr. kidnapping) and it accidentally went off, blinding him.

By all accounts the injury never held him back. He became proficient in Braille, graduated from Kenyon College, and spent a year at Harvard Law School before joining the family radio business. He was a trustee of the Cleveland Clinic, the Cleveland Museum of Natural History, the Cleveland Orchestra, and the American Foundation for the Blind, among other organizations. His $1 million gift to Kenyon in 1985 established the college’s first endowed faculty chair in Asian history.

“Though blinded at a young age,” Kenyon’s president, S. Georgia Nugent offered in her remembrance, “Jim Storer was in many ways a man of great vision,” and with that thoughtful tribute, a life is revealed, a mystery solved, and a story comes full circle.